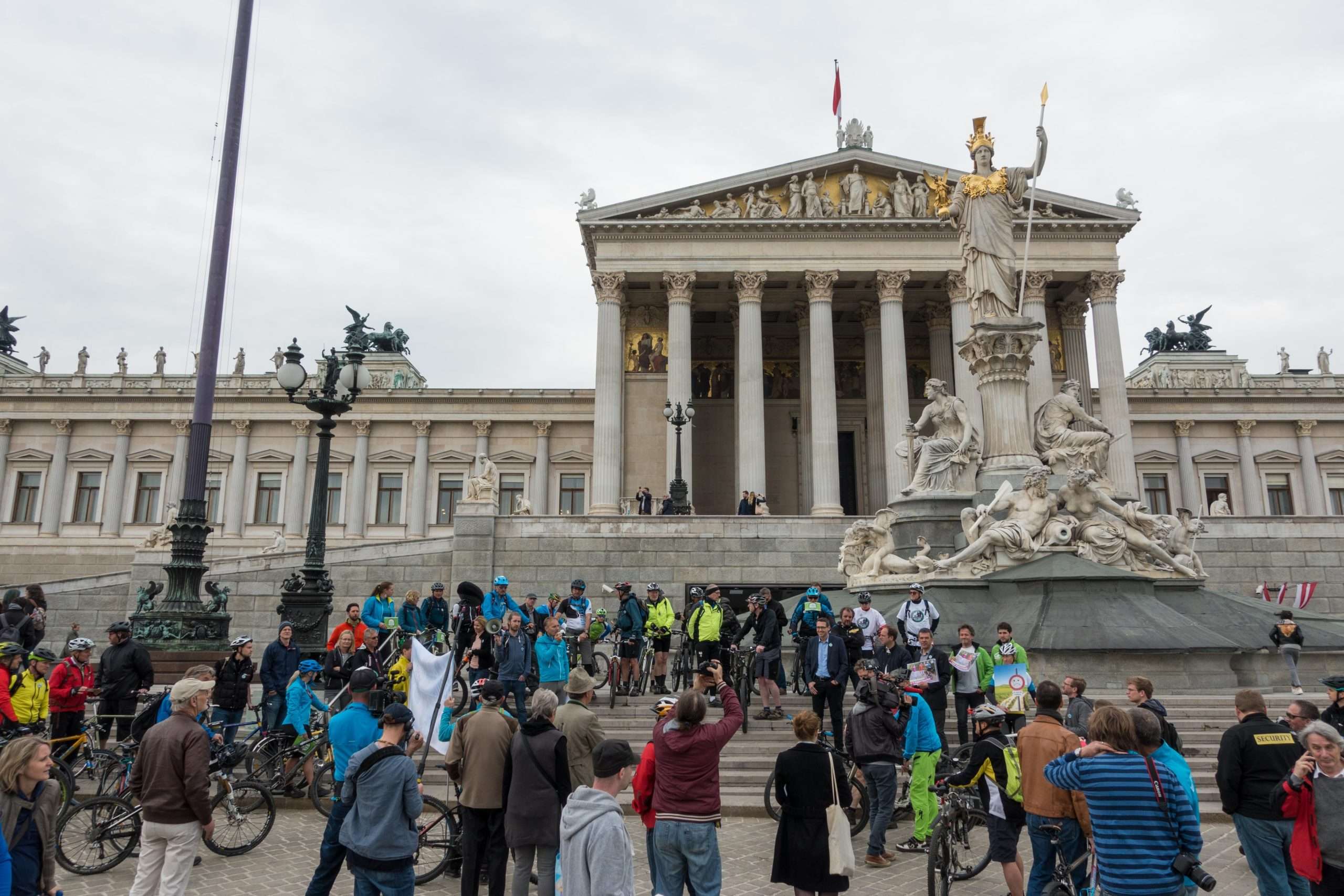 The campaign to legalize mountain biking on forestry roads in Austria has entered its fourth year and has now become part of a political debate to change the law. It seems so obvious and clear. The possibility to ride your bike in the forest, to have legal access to forest roads and paths. But it’s never as simple as it looks. In Austria for example, this is generally prohibited. Skiing and hiking are legal, but those who are caught in the forest with their bicycles face high penalties – no matter how wide the paths are.A shame, even more so in a country that is as much like tourism as Austria. Although biking is possible on special routes, the mountain biker is always dependent on the grace and arbitrariness of the authorities and the owners of the forest. Only these routes marked extra as bike routes may be used. There is the possibility to get cycling permits based on a contract. This suggested procedure costs a lot of money and time and works well in the tourist region of Tyrol, but not as good in the east of Austria where there’s less touristic development.Problem awareness in politicsFor a long time, politics did not react to the problem at all. The outrage was swept under the table in silence, and winter sport was economically more important anyway. In addition, biking was not allowed, but was tolerated. So the problem did not really seem to be one.This ‘peace’ lasted until a few years ago. Then several forest owners and tenants insisted on their right and many mountain bikers were forced to pay high financial penalties and injunctions. The “Muckenkogel case” set a sign. Four mountain bikers where accused for trespassing, hauled into court and charged with a penalty of € 15.000. It came to a settlement in court but the public was indignant. Since then, the law still hasn’t changed.Interest associations raise up for a comprehensive legalizationInterest groups such as Upmove and Radlobby, accompanied by the alpine clubs (Naturfreunde and Alpenverein) have been advocating legalization of the biking in Austria since then. More and more indignant voices from the tourism sector have recently been heard. Austria’s policy was lagging behind neighboring countries, the competitive disadvantage was unacceptable and would seriously endanger the local economy, particularly in tourist regions.Also the protest marches of the mountain bikers (nicknamed “Trutzpartie”) are keeping the matter visible to politics and media. For example, the last “Trutzpartie” took place in front of  the Parliament in Vienna, where the arrest of the mountain biker Martin Koch was reenacted, which happened on April 1, 2017 in Leoben on a forest road. He and others subsequently got a money penalty over €360€. This illustrated the absurdity of the criminalization of mountain biking in Austria.Reactions in politicsThe repeated protests on behalf of several mountain bike interest groups seem to have its effect among the parliamentarians in Vienna, which in the end have to decide on a change of law. First, it is only about legalization of cycling on forest roads. A first small step to legalize mountain biking in Austria.The Green party brought a first request of amendment to the law in the parliament. It foresees that biking on forestry trails is to be allowed in principle, but at his own risk and with subordination to all other forest users. ÖVP and FPÖ are against the amendment of the law, the Green party and the SPÖ in favor.Georg Willi of the Green party said: “In Tyrol, the consensus has been working very well for 20 years. But the property relations in Styria, Upper and Lower Austria are different and such models as in Tyrol are difficult to implement here. We believe, however, that an amicable solution can be achieved in the sense of all parties involved if the owners are clearly released from liability. “Markus Vogl, a member of the Social Democratic Party (SPÖ), was also in favor of a basic legalization of cycling on forest roads. Responding to the demand of a foreign journalist, whether foreign cyclists in Austria could be prosecuted, he said: “This is very unlikely. In many tourist regions there is a good offer. Since there are always problems, a solution has to be made. A basic release of the forest road would be ideal. “At the time of the writing of this summary, the Austrian parliament is in resolution, because of withdrawal of the ÖVP from the government.Andreas Pfaffenbichler from Upmove tells us: “The hope is, that the Green party or the SPÖ will be in the next government. In that case, an amendment to the forestry law to allow cycling on forestry roads could get into an coalition agreement. This could be a great chance for our matter!”