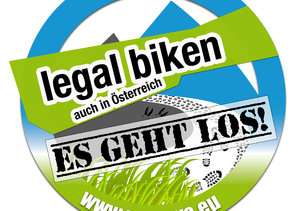 Lots of advocacy news from Austria and Germany where member organizations Upmove and DIMB work incredibly hard to improve trail access conditions for mountain bikers. Petition to abolish 2-meter ruleLast year, Deutsche Initiative Mountain Bike started a petition for the abolition of the 2 meter rule which was  recently (finally!)  treated by the Parliament of Bade-Württemberg.  Prior to this, various roundtable discussions with other recreational users, nature protection organizations, hunters associations and other stakeholders took place. Although the various parties came closer to each other and have a better understanding of each other’s interest and outdoor experience, the Parliament of Baden-Wurttemberg however didn’t dare to abolish the 2-meter rule once and for all.A big disappointment for DIMB but they don’t intend to give up the fight. New elections and a new Parliament might offer new possibilities. DIMB will continue their advocacy efforts by bringing recreational users and land managers together. Creating mutual understanding, introducing the idea of shared trails and as ultimate goal, the legal right to ride singletracks. Please keep supporting them!Legalize mountain biking in AustriaIn Austria the Legal Biking! Auch in Osterreich campaign is in full swing. IMBA EU member Upmove raised awareness  for the plight of mountain bikers in Austria through public actions. Mountain biking is illegal on most dirt paths, with the exception of some bike parks. The legislation was drawn up decades ago and never adapted to more modern forms of sport and leisure. In addition, there is a strong lobby from the hunters association against trail access for mountain bikers. That’s why . To get the attention of politicians and media, Upmove started the Legal Biking campaign in combination with several public actions.The first ‘ Trutzparty ‘ took place at the Muckenkogel.  Mountain bikers demonstratively pushed their mountain bikes up the mountain because cycling is officially prohibited by law. The second Trutzparty will take place tomorrow, Saturday 25 October Trutzparty in Styria. http://www.upmove.eu/trutzpartie[[{“type”:”media”,”view_mode”:”media_responsive”,”fid”:”377″,”attributes”:{“alt”:””,”class”:”media-image”,”style”:”max-width: 680px;”,”width”:”100%”}}]] Photo by Daniel Hinterramskogler