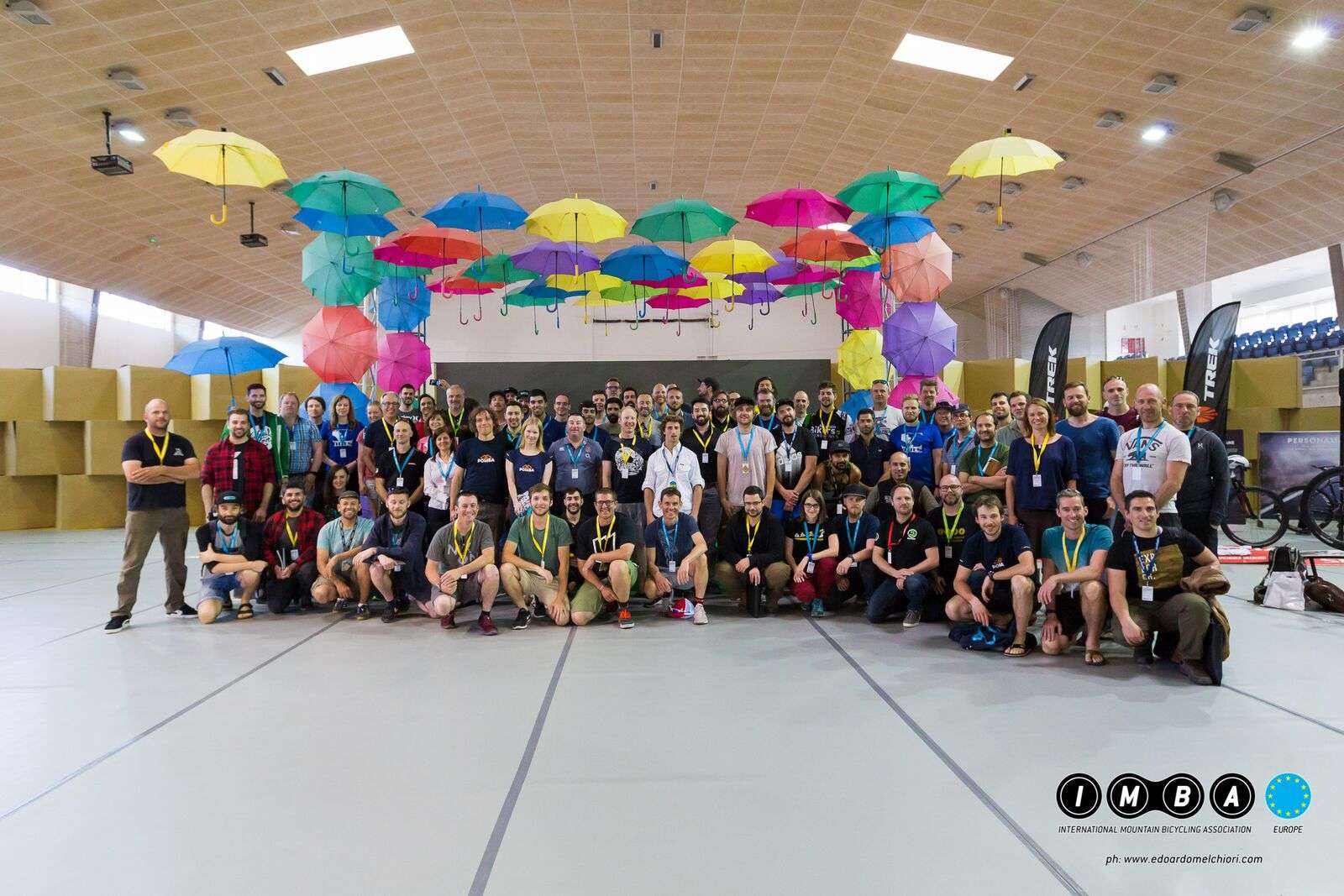 Sundrenched Águeda in Portugal was the perfect location for IMBA Europe’s 2017 Summit. With  a total of 110 participants and exhibitors from 17 different countries, the 2017 summit was the best visited so far.  New to this year’s program were the pre-conference site visits. The first stop at ABIMOTA LEA, the Portuguese cycling industry association, gave the attendees more insight in the Portugal Bike Value project and included a tour in the cycling lab. Afterwards, the newly constructed urban bike park was visited and although not finished yet, the contours of the park were already well visible. The trail building crew on site explained the process and goal of the bike park to attract both young and experienced riders and even offering some lines for adapted mountain biking. With a shared facility of the mountain bike and orienteering club aside, it became clear this project transcends just tourism objectives but also really contributes to local community building. The official opening of the bike park will take place by the end of June. The Mayor of Águeda Gil Nadais officially opened the Summit on Friday evening, followed by a word of outgoing IMBA Europe president Harold Veldkamp.  Best practices and newly conducted mountain bike studies  Saturday and Sunday’s program traditionally covers the dissemination of best practices, workshops and presentation of new mountain bike studies (e.g. wildlife disturbance experiment). The four key themes this year were business development & creating impact, MTB research, MTB tourism and community building. During additional breakout sessions, issues like trail access advocacy, organizational development, lobby for funding and the planning of outdoor infrastructure led to lively discussions between the participants. A selection of the presentations given at the 2017 summit can be found on IMBA Europe’s website.  Part of the social program and one of the highlights of the summit was the dinner and  award ceremony of the pan-European Take Care of Your Trails Weekend campaign at the Institute of vine and wine. Slovenia went away with a stunning plaque, designed by Scottish artist LeRoc. The coordinator of the Slovenian groups was Peter Dakskobler. Peter was delighted with the victory of Slovenia as best European mountain biking community 2017  Expanding network and new leadership  During IMBA Europe’s general assembly, IMBA Europe’s board went through an almost complete transition. Harold Veldkamp, president of IMBA Europe resigned after almost 5 years and was honored while he stood at the base of the creation of IMBA Europe. Harold’s last act as president was to appoint Mike van Abel as IMBA Europe’s first Honorary board member. Last September, Mike van Abel resigned as IMBA US executive director and as IMBA Europe board member. Mike has been of great value for IMBA Europe, a linking pin between the US and Europe, putting the I in IMBA. A lot of changes for the organization. With two board members leaving, IMBA Europe had to fulfill these vacanies. IMBA is glad to announce that Thomas Larsen Schmidt from Denmark has been elected as IMBA Europe’s new president, Edoardo Melchiori from Italy as treasurer and Raymond Cheminal, representing Mountain Bikers Foundation from France, as regular board member. Other positive news came from the fact more national and associate members officially joined the IMBA Europe network. Cycling UK, DIMB (GER), Cykelfrämjandet (SWE) and Insamlingstiftelsen Skånsk MTB Utveckling (SWE) were approved by the current member organizations. After the summit, Federação Portuguesa de Ciclismo from Portugal and New Horizons, a non-profit from Romania, active in outdoor education and MTB ecotourism also applied for membership with IMBA Europe. A positive signal and evidence of an increasing need for collaborative working at the European level and to exchange knowledge.  Thomas Larsen Schmidt, IMBA Europe’s new president, stated: ‘We’re really proud of the quality of this summit that brought all aspects of mountain biking together. Great quality of speakers and in-depth discussions about sustainable MTB development, the need for a strong voice to represent mountain bikers interest at all levels but foremost, the huge potential to grow mountain biking on the EU level. The municipality of Agueda has showed great hospitality and an clear ambition to become Portugal’s next MTB destination. With a new bike park that could become the model for other municipalities to follow and a beautiful countryside that has great potential for further development, we’re sure that we just had our summit in one of the most MTB friendly communities we have seen so far.’