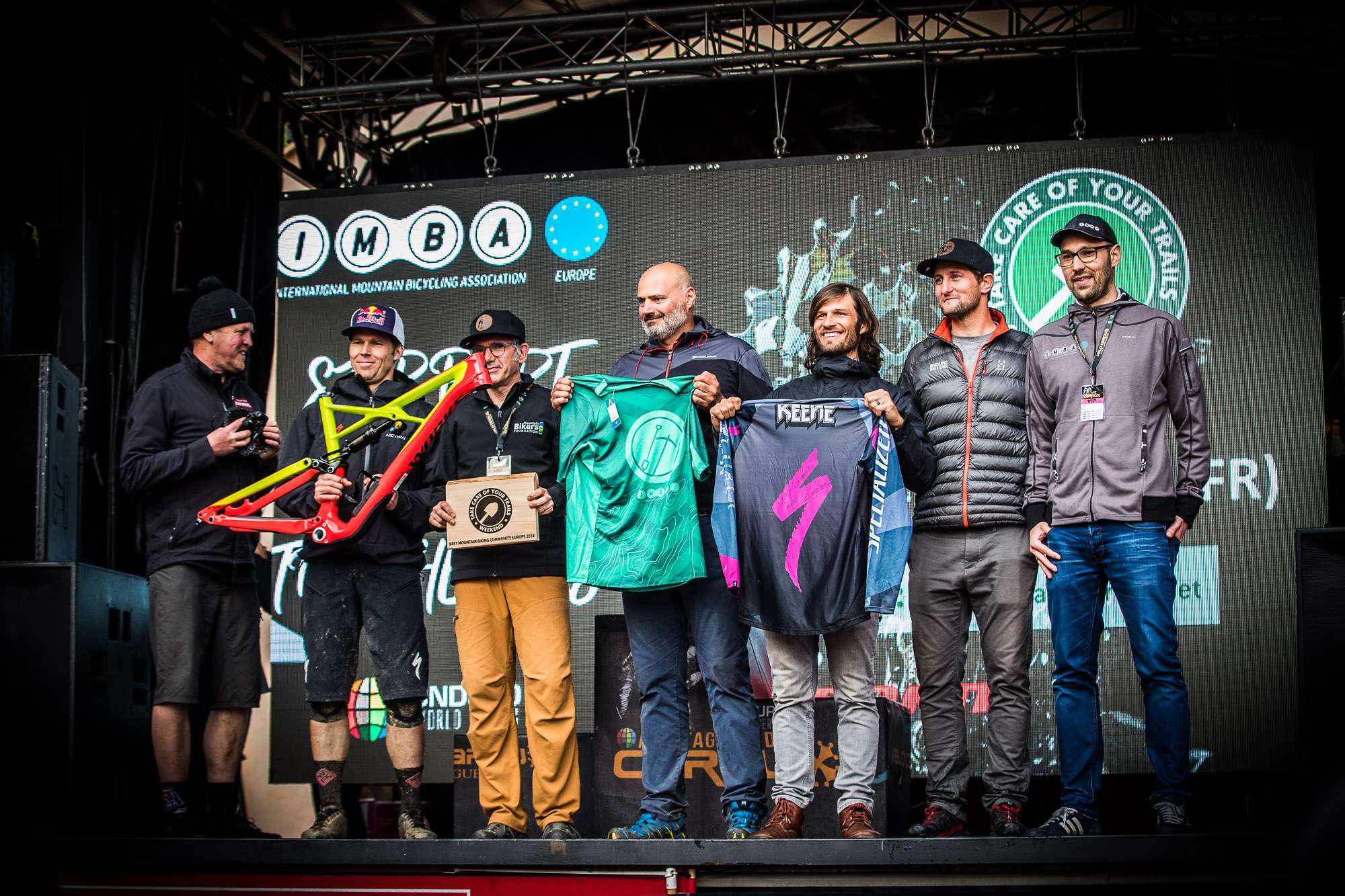 The second pan-European Take Care of Your Trails campaign mobilized 114 groups from 12 different countries across Europe to work on their trails and brought the French the title of best MTB community Europe 2018. More than 1640 volunteers took part in the2018 TCoYTW campaign, a growth of + 35% compared to last years campaign. The campaign highlighted the fantastic voluntary contribution these groups and volunteers make towards their own local trails. It’s also great to see these trail maintenance events are no longer one-off actions but activities that are embedded in the local mountain bike scene and really help to attract new volunteers or to generate positive local publicity. With support of EWS manager director Chris Ball, the results of the campaign and award ceremony took place at the 3rd round of the Enduro World Series in Olargues, France. With passionate comments of EWS board member Enrico Guala, France was awarded ‘best mountain bike community Europe’ of the 2018 Take Care of Your Trails campaign. Lionel Macaluso, president of Mountain Bikers Foundation, and Thierry Jalbaud of MBF’s Haut Languedoc chapter, were called upon the stage to receive the award. As trail advocacy association, MBF was the national coordinator of the TCoYTW campaign and managed to mobilize 34 groups to work on 54 sites with 594 volunteers. Commendable was also the local and regional media coverage of the French TCoYTW actions, the partnerships with regional parks and collaboration with the bicycle industry. Local MBF volunteers also helped to repair some trail sections of the EWS stages afterwards to minimize the impact of the event. Mountain Bikers Foundation was exited to receive the award, especially now the organisation celeberates it’s 10th anniversary this year. ‘Mountain Bikers Foundation is mainly runned by volunteers and we’re getting better organized year by year. That’s why we’re really proud of this achievement. Compared to last year, we almost quadrupled the number of volunteers. The volunteers that are leading the local and regional chapters did a great job. Not only during this campaign but also in working with land managers and governmental bodies to protect or enhance trail acces’’ said Lionel Macaluso. ‘All people that devoted their time on this campaign are true trail heroes for us. What might look quite common for some trail maintenance groups, taking care of your local trails, is for the majority of the mountain bike community completely new. Most mountain bikers do see the value of volunteer work but never actually engageand organize themselves. That’s why it’s good to have this campaign and to hightlight the contribution which local trail crews make across Europe at least once a year,’ said Mark Torsius of IMBA Europe.Other countries that did really well this year were Italy (12 groups, 275 volunteers), the Netherlands (17 groups, 208 volunteers), Scotland (9 groups, 168 volunteers), and Slovenia (22 groups, 152 volunteers). However, numbers only tell a small part of the story. In the same weekend of the award ceremony in France, Spanish mountain bikers were involved in a huge protest ride to prevent the adoption of the new management plan of NP Sierra de Guadarrama which has far-reaching consequences for mountain bike access. The Slovenian mountain bike community once showed their value and commitment to our sport by hosting the IMBA Europe Summit last April in Kranjska Gora and now taking it up to the next level with two mountain bike advocates joining political parties to be eliglibe for the upcoming national elections. For 2019, the Take Care of Your Trails campaign will be adjusted on a number of points. Instead of focussing on one or two weekends, participating groups will have more flexiblity in planning their sessions in a fixed period of one month. [[{“fid”:”1123″,”view_mode”:”media_responsive”,”fields”:{“format”:”media_responsive”,”alignment”:””,”field_file_image_alt_text[und][0][value]”:false,”field_file_image_title_text[und][0][value]”:false},”link_text”:null,”type”:”media”,”field_deltas”:{“1”:{“format”:”media_responsive”,”alignment”:””,”field_file_image_alt_text[und][0][value]”:false,”field_file_image_title_text[und][0][value]”:false}},”attributes”:{“height”:383,”width”:680,”class”:”media-element file-media-responsive”,”data-delta”:”1″}}]]