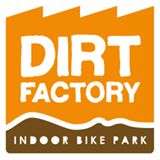 Dirt Factory, UK’s first indoor mountain bike park will become reality because of a very succesfull crowd funding campaign.  The Dirt Factory team officially launched their campaign at their kick-off event at The Rise Manchester on Sunday 31 January. Over 300 attendees watched a preview of the Dirt Factory Crowdcube pitch video, met the team and made the first investments. Using Crowdcube as crowd funding platform, it only took 17 days to raise the target of £300.000! An amazing result.After the first week, investments from over 110 individuals boosted the campaign and over 50% was funded already. An important milestone for Dirt Factory. That it would only take 10 more days to reach the final target exceeded even the expectations of the team behind the project.  Dirt Factory will be a fun and friendly recreation facility for all ages and abilities. The park will boast a wide range of progressive, flowing, indoor bike trails, skills zones, jumps and foam pits. The team behind Dirt Facotry knows that you can’t replicate the outdoor experience but aims to make mountain biking and BMX more accessible by bringing high quality trails to a highly populated area. Dirt Factory will give you the chance to go ride your bike when the weather is bad, after work or school, through the darker nights or when you don’t fancy travelling long distances to trail centres.More info? Visit dirtfactory.org [[{“type”:”media”,”view_mode”:”media_responsive”,”fid”:”563″,”attributes”:{“alt”:””,”class”:”media-image”,”style”:”max-width: 680px;”,”width”:”100%”}}]]